Supporting the Exploration of Life Science with Experimental Data

The research of basic science is supported by experimental data, so is the exploration of life science. However, the production of each experimental data can not be separated from the contribution and contribution of experimental animals, which are very precious.
On the morning of August 28, 2021, the Research Center of Cryomedicine, Shandong Yinfeng Life Sciences Research Institute, the research unit of our foundation, welcomed two special "voluntees": female beagle dogs named Cryobig8 and Cryobig9 respectively, and were also the 8th and 9th animals participating in the experiment since Yinfeng Life Extension Plan was started. Cryobig8 and Cryobig9 will be validated by different cryopreservation experiments in order to monitor the key technical indexes such as temperature, pressure, flow rate and replacement degree of protective agent during cryopreservation and perfusion more accurately and intuitively.

Experiment to verify the scientificity of surgery

At 10:00 a.m., hypothermia surgery was officially started. Cryobig8 was established by operating experts after anesthesia. The extracorporeal circulation system and membrane lung were turned on, and the body temperature was rapidly reduced to below 18°C by low temperature circulating water bath. As a control experiment, Cryobig9 was perfused in a different way, and only the self-blood was used for cooling.
After the perfusion was completed, the dogs were transferred to a programmed chiller precooled to 4°C, started to cool to -190°C over twenty hours, and transferred to a separate stainless steel liquid nitrogen storage tank for liquid phase storage. 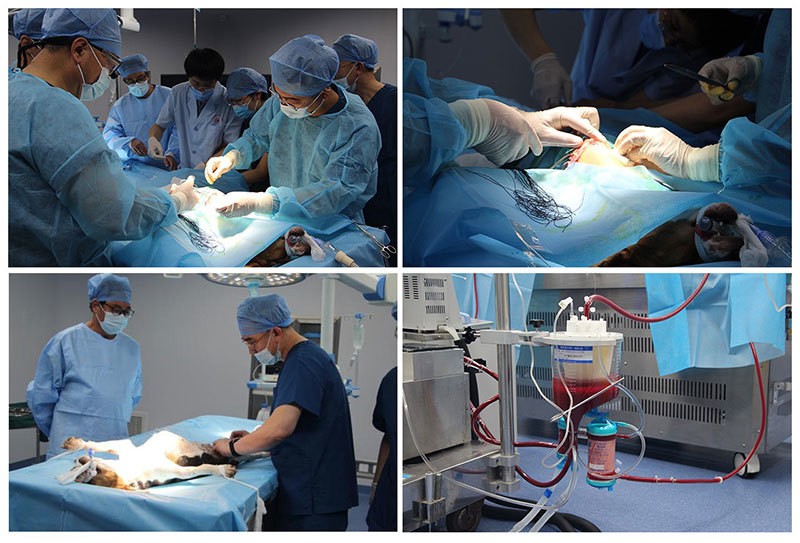 The operation and perfusion lasted 7 hours from 10 a.m. to 17 p.m. on the 4th. The clinical expert team, including cardiac surgery experts Sun Wenyu and Zhao Xin, anesthesia experts Hou Yuedong and Li Huihui, and extracorporeal circulation physician Zhao Fen, participated in the demonstration of this experimental protocol and the implementation of surgery.

In order to verify the protective effect of cryoprotectant on human body and tissues and organs, after perfusion, part of kidney, liver and muscle tissue of different parts in different experimental periods were taken as samples, and the morphology and activity of histiocytes were detected together with the frozen samples.

According to the experimental protocol, the two dogs will also be subjected to CT scan in the future to compare the effects of cryoprotectant perfusion and the structural changes of tissues and organs after preservation.

To The Heroes behind The Scenes

The beagle dog is recognized by the international medical and biological community as the most ideal experimental dog breed. Because its internal organs are very similar to human beings, and they have good body quality and strong obedience consciousness, it has become the best choice for in vivo experiment in many animals. They are warriors of the age of peace and have made great sacrifices for the health of our human race and the development of the life sciences.

Since the Yinfeng Life Extension Research Plan was launched in 2015, the Research Institute has carried out several animal experiments to simulate the surgical process, verify the perfusion effect and improve the surgical scheme, etc. Yinfeng Life Extension Plan has pioneered the research and made historic breakthroughs in the efforts of the researchers in the continuous exploration of these "heroes behind the scenes", making the cryopreservation technology of our country continuously improved and comparable to the world.
Finally, let us pay tribute to the beagle dogs! Pay tribute to these behind-the-scenes heroes who have made great contributions to scientific research! Pay tribute to all the unnamed soldiers who have given their precious lives to human health and medical development!