The first case in the world! Pig kidney transplantation to human body, normal function, no rejection.

Recently, the Langone Medical Center of New York University conducted a special experiment in which kidneys from pigs were transplanted into humans for the first time, but no rejection has yet occurred. The kidneys in this experiment came from a genetically edited pig.

Decades ago, scientists envisioned the use of animal organs to solve the shortage of organs available for human transplant. Because the size of pig organ is just right, and the anatomical structure, physiological index and blood group antigen of pig are similar to those of human, it has become the focus of research. So far, pig heart valves have been successfully used in humans for decades; the blood thinner heparin is extracted from pig intestines; pig skin grafts are used for burns; and Chinese surgeons use pig corneas to restore patients' eyesight. However, xenotransplantation cannot be used simply by buying a pig on the market. in order to avoid xenorejection, scientists need to modify the genes of pigs and minimize the molecules in the cells that can cause rejection in the human body. so that pig organs can smoothly take root in the human body. 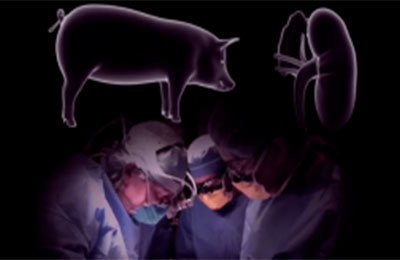 The experiment was conducted by a team led by Professor Robert Montgomery, director of the Transplantation Institute at New York University's Langney Health Center. The experimental pig was type O blood. The family of a human receptor, a female brain-dead patient with signs of renal insufficiency, agreed to conduct the experiment before she stopped showing signs of life. The Montgomery team has been preparing for this attempt for three years. During the operation, they used surgical clamps to separate the patient's blood from the pig's kidneys. Once they release the clamp, the blood will be injected into the new organ. If the new kidney turns blue quickly, it indicates that the immune system has sounded the aggregation signal, activating immune cells to fight against foreign organs. This means that the Montgomery team's work over the past few years has been in vain.

To avoid risk, the team connected pig kidneys to a pair of large blood vessels outside a deceased recipient last month and observed them for two days. They found that the kidney did what it had to do, filtering waste and producing urine without triggering rejection. Similarly, during the operation, the brain-dead patient did not develop rejection after a pig kidney transplant, and everything is normal. "the surgery looked very normal," Montgomery said. "abnormal creatinine levels returned to normal after the transplant." The researchers say this is an important step in implementing a xenotransplantation program, which will save thousands of lives each year in the near future.